Kamykowski, Gavin & Taylor attorneys Ryan J. Gavin and Mariel Taylor successfully defended an otolaryngologist (ear, nose and throat specialist) and her practice group in a case alleging malpractice during the performance of endoscopic sinus surgery.  The last pre-trial settlement demand was for more than $1,000,000.  The plaintiffs asked for damages of almost $2,800,000 in closing argument.  The jury, after almost four hours of deliberation, found that KGT’ clients were not guilty of malpractice.

The plaintiff was a female in her mid-30s with a history of frequent sinusitis.  Prior to the surgery at issue, she had undergone two sinus surgeries.  Both were completed without complication.  The defendant physician performed a third surgery in July, 2014. 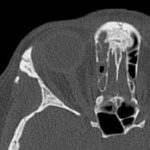 Sinuses are cavities in the skull.  Sinusitis is the inflammation and infection of those cavities.  Endoscopic sinus surgery is performed by inserting a camera and instruments up the nostril to open and aerate those infected sinus cavities.  Some sinuses are opened with the insertion and inflation of a balloon.  The ethmoid sinuses, which reside adjacent to the eye sockets, are cleared using other instruments to remove bone and soft tissue.  As demonstrated by this CT image, the ethmoid sinus has a honeycomb like structure with a row of “air cells” from front to back.  The gray in those air cells represents infection – healthy sinuses would have cells full of black air.

The surgeon opened the right maxillary and frontal sinuses before reaching the right ethmoid sinuses.  Before beginning the ethmoid sinus procedure, she checked the plaintiff’s right eye and all appeared normal.  She opened the ethmoid sinuses and did not observe any sign there had been a complication.  However, upon checking the right eye again, she observed that it was proptotic (bulging).  This is an emergency and sign of a possible complication.  She treated the bulging eye and consulted with an ophthalmologist who cleared the plaintiff for release from the hospital.

Postoperatively, the plaintiff complained of new double vision.  In addition, the  pathologist who examined tissue collected from the eye found “skeletal muscle.”  This is a sign that a muscle within the orbit (eye socket) had likely been injured.  The patient also claimed that she had a permanent injury to the trigeminal nerve.  This is one of the cranial nerves responsible for sensation in the face.

Plaintiff had surgery to correct the double vision in her primary gazes, but had permanent residual double vision when looking up or to the left.  The plaintiff also claimed that she had almost daily severe headaches, frequent nausea, a sensation of pressure, and sensitivity to light.  She alleged this made it difficult for her to tolerate bright indoor lights, to spend significant time outdoors, to drive safely, and to perform household chores.  In addition to her claim for personal injuries, her husband made a claim for loss of consortium.

The muscle injured during surgery was the superior oblique.  This is one of the muscles that orients the eye and controls its movement.  When it is injured, the eye is no longer oriented straight ahead while at rest.  The orbit and eye muscles are separated from the sinus by a very thin bone called the lamina papyracea (latin for “paper thin”).  The plaintiff used the following two illustrations to depict her anatomy and injury. 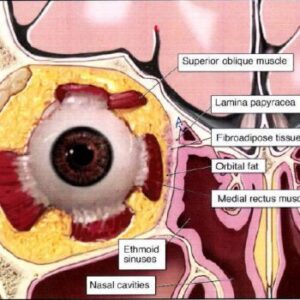 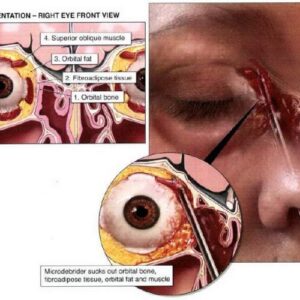 Note how these two illustrations show distance between the lamina papyracea and the superior oblique muscle.  This space is filled with yellow fat.  The plaintiff claimed the defendant surgeon was negligent in allowing her instrument to penetrate the lamina papyracea and remove part of the superior oblique muscle.  Plaintiff retained a highly experienced and published otolaryngologist to testify that the defendant negligently injured the superior oblique by not carefully monitoring her microdebrider, not controlling her instruments, or otherwise not closely observing the eye for signs of traction on the muscle.  Plaintiff also put on the testimony of a neurologist, vocational rehabilitation specialist, and a life care planner.

It was undisputed that the injury occurred during the operation and was caused by an instrument controlled by the defendant surgeon. Ultimately, the issue was whether she performed the surgery negligently or, alternatively, this was an unfortunate complication.  KGT worked with its clients and experts to carefully review the plaintiff’s CT images to determine whether they would help explain the complication to the jury.  The actual pre-operative imaging of the plaintiff revealed a striking difference between her anatomy and her custom illustrations.  The following CT image with color was used to highlight the relevant structures for the jury.

In this image, the green line represents the lamina papyracea – the paper thin bone separating the sinus from the orbit.  The blue structure is the superior oblique muscle.  Thus, plaintiff’s actual anatomy demonstrates that her superior oblique is adjacent to the lamina papyracea – not distant from it as shown in the illustration.  KGT’ expert opined that the lamina papyracea most likely suffered an accidental fracture while the ethmoid sinus was being opened.  This could have occurred while the surgeon was removing part of the bone that extends to the right from the lamina papyracea.  This fracture would have allowed injury to the muscle to occur as the surgeon continued to use her instruments to clean out infected tissue while remaining within the ethomid sinus.  As was further explained, injuries to the lamina papyracea and orbital muscles are complications known to occur at times even when a surgery is performed consistently with the standard of care.

KGT presented the testimony of an otolaryngologist to support the care provided by the surgeon.  In addition, a neuro-ophthalmologist was called to testify regarding plaintiff’s neurological history and likely alternative explanations for her headaches and other complaints.

As stated above, the jury returned a verdict in favor of KGT’ clients.  The evidence ultimately persuaded the jury that the defendants had taken appropriate measures to prevent injury and were not guilty of negligence.